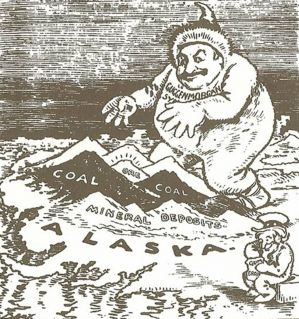 The Bering River Watershed region is one of the most unique and productive ecological areas along the Gulf of Alaska coastline. Essentially an island between ice, river, rainforest and sea, this region constitutes critical habitat for millions of birds, terrestrial and marine mammals, and wild salmon. It is one of the last remaining pristine such ecosystems to be found anywhere.

Due to the natural bounty and remoteness of the area, 90 percent of the people living in the region rely in some way on natural resources for employment or subsistence needs. Each year, the Copper River Delta and Prince William Sound support approximately 500 commercial fishing gillnet operations, several hundred purse seine fishing operations, numerous canneries and important sport and subsistence fisheries. In addition, Native people continue to practice a flourishing subsistence lifestyle rooted in over 10,000 years of cultural experience with the place.

Unfortunately, this pristine environment, upon which so many depend, has never been more threatened than it is today. On the eastern portion of the Copper River watershed, situated between the Wrangell-St. Elias Mountains and National Park to the north and east, and the Gulf of Alaska to the south, lays the Bering River coal field.

Today, KADCO owns the coal patent and development rights for the Kushtaka Mountain and Cunningham Ridge regions of the coalfield. These zones contain low and medium volatile bituminous coal used for power generation in Korea and around the world, and as such, are the most economically valuable and marketable coal deposits in the area. In the land transfer, the Chugach Alaska Corporation retained subsurface coal rights to an anthracite coal deposit in the Carbon Mountain region, as well as all surface, timber, and water rights over the entire 73,000 acre inholding within the Chugach National Forest.

In December 2016, the largest carbon-offset conservation transaction in Alaska’s history occurred when 115,000 acres of rainforest and 62,000 acres of the Bering River coal title was transferred to the Native Conservancy land trust. EPC assisted the Chugach Alaska Corporation with this transaction, and because of these efforts the majority of the coal title has been retired, never to be developed. Rather than clear cutting old growth forest and mining coal in the region, conservation has become the most viable economic alternative for the 2,000 shareholders of Chugach Alaska Corporation.

However, there still remains the 11,000-acre coal tract owned by KADCO, and there is still demand for coal extraction, threatening the wild salmon ecosystem, the local economy, and the food security of the region. Fortunately, over the past fifteen years, the Eyak Preservation Council (EPC) has formed a strong relationship with the majority shareholder of KADCO who is interested in selling the Bering River coal patent to conserve the region. In partnership with the Native Conservancy (tNC), EPC is working to purchase and permanently retire the development rights to the Bering River coal field in its entirety.

If successful, purchasing the coal field development rights would keep the coal in the ground and subvert the disastrous environmental effects associated with strip and mountain top removal coal mining. This in turn would restrict the feasibility of other infrastructure projects that rely on the development of the Bering River coal field. These include the creation of a deepwater port at Shepard Point, renewed investment in oil and gas production at Katalla, the creation of a 55 mile road across the Copper River Delta and other proposed roads that further penetrate into the roadless region.

The long battle for the Bering River coalfield is coming to an end. Permanent protection of this pristine ecosystem would mark one of the greatest conservation feats in history. With very little standing between the development of this coalfield and the impending destruction of the entire Copper River watershed, it is clear that the time to act is now before this historic conservation opportunity is lost forever.